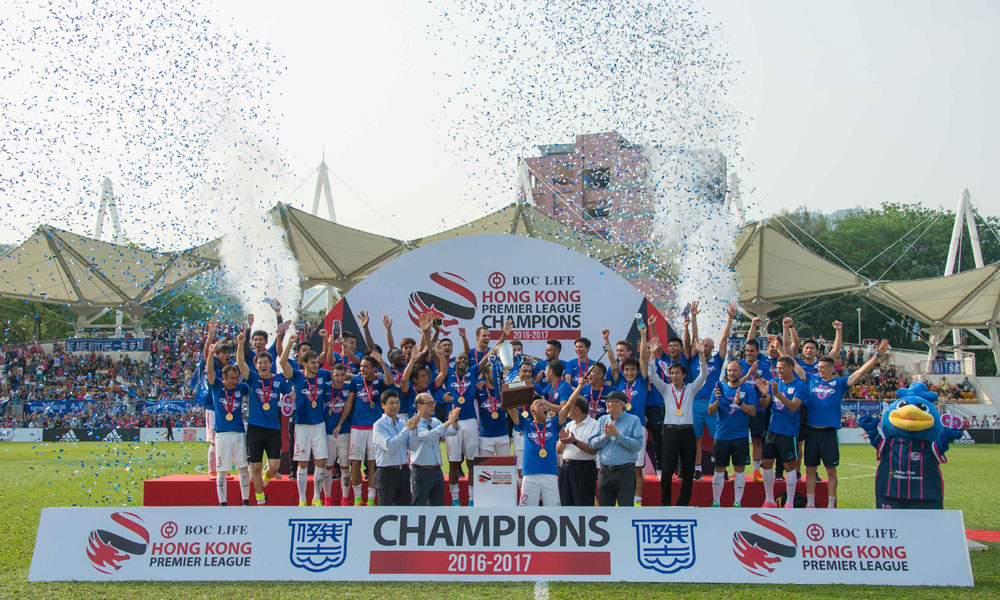 Kitchee was one point behind Eastern before the last round, so all they were focused on was winning the game. After 90 minutes, Sandro’s hat-trick and a goal from Krisztian Vadocz allowed them to leapfrog Eastern and pick up their eighth championship trophy in the last match of the season. Michel Lugo’s stunner gave Eastern some hope, but ultimately Kitchee emerged as deserved winners of the 2016/17 Hong Kong Premier League.

Kitchee fielded once again their rather controversial line-up, with no Hong Kong born or home-grown players in the starting XI. Meanwhile Eastern opted for a match plan similar to their Asian Champions League campaign, with Diego Eli, Leung Chun-pong and Bai He as defensive midfielders. Lee Hong-lim and Jaimes Mckee were in charge of the wings.

As expected, Kitchee dominated the game right from the start and Eastern went for a defensive approach in the first half. The Bluewaves had an early chance to open the score in the sixth minute, after Leung Chun-pong had fouled Matt Lam in the box, but Sandro’s penalty was well saved by Yapp Hung-fai. However, just three minutes later Sandro made up for his miss, and scored with a header following a cross by Fernando.

Chan Yuen-ting immediately reacted with an early substitution, as her team was forced to change to a more offensive approach. Michel Lugo came in for Lee Hong-lim, but Eastern still struggled to produce chances and Kitchee continued to play out their dominance.

Consequently, Alex Chu’s men increased their lead in the 39th minute. However, that happened not without controversy, as Josh Mitchell was down with a head injury in the box. Strangely, the referee chose not stop the match. Kitchee continued their attack and Sandro scored an unmarked goal, as downed Mitchell kept him onside. Eastern’s player protested, but the referee insisted the goal was valid.

Eastern had a chance to reduce the deficit during stoppage time, when Manuel Bleda’s header was denied by Wang Zhengpeng. The ball fell to Jaimes Mckee, but he failed to make contact. So the first half ended with a 2-0 lead for Kitchee, which already meant a huge step towards the title. 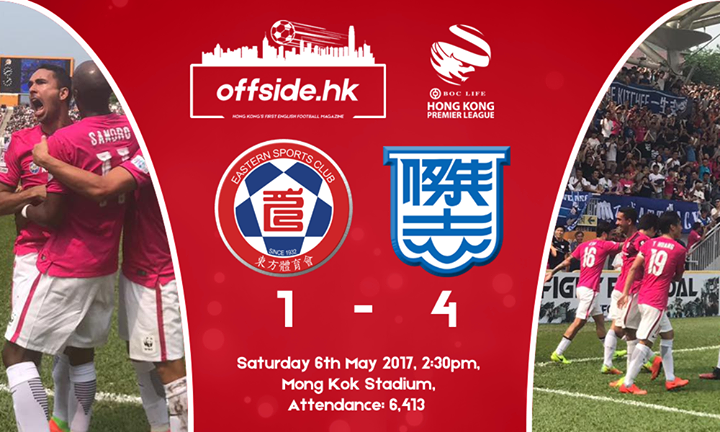 Chan Yuen-ting used all remaining substitutions at the start of the second half, with Giovane da Silva and Ju Yingzhi coming on for Josh Mitchell and Leung Chun-pong. At that point, Eastern had to score at least two goals to equalise, in order to keep their championship hopes alive. However, that plan was quickly destroyed, when Kitchee increased their goal gally in the 47th minute. Hungarian midfielder Vadocz headed the ball home following a corner by Jared Lum.

With nothing more to lose, Eastern pressed forward and their ambition was rewarded with a goal in the 55th minute. Michel Lugo’s fierce shot from outside the box went straight into the upper left corner. The champions of last season continued to press for another goal, but despite getting more possession, they failed to create any threatening chance.

Eventually, it was Sandro once again, who sealed the match and the league title in the 77th minute. Fernando’s low cross found the Brazilian goal-getter, who is now the undisputed top-scorer of the league. At that time, Eastern’s frustration turned into resignation, making the rest of the game a rather unspectacular affair.

Nevertheless, visitors of the sold-out Mong Kok Stadium were also awarded a rare sight. After the referee blew the final whistle, ecstatic Kitchee fans invaded the pitch to celebrate with their team. Kitchee were crowned the 2016/17 Hong Kong Premier League champions for the second time after 2014/15, making it their eighth championship title overall. That means that Kitchee will also represent Hong Kong in the group stage of the 2018 Asian Champions League. If that’s not enough, Alex Chu’s men still have the chance to win the treble this year, when they face South China in the FA Cup final on May 14. On Monday, Kitchee will also announce the official date for their friendly game against Tottenham Hotspurs. One of the possible dates currently circulating is May 28th. 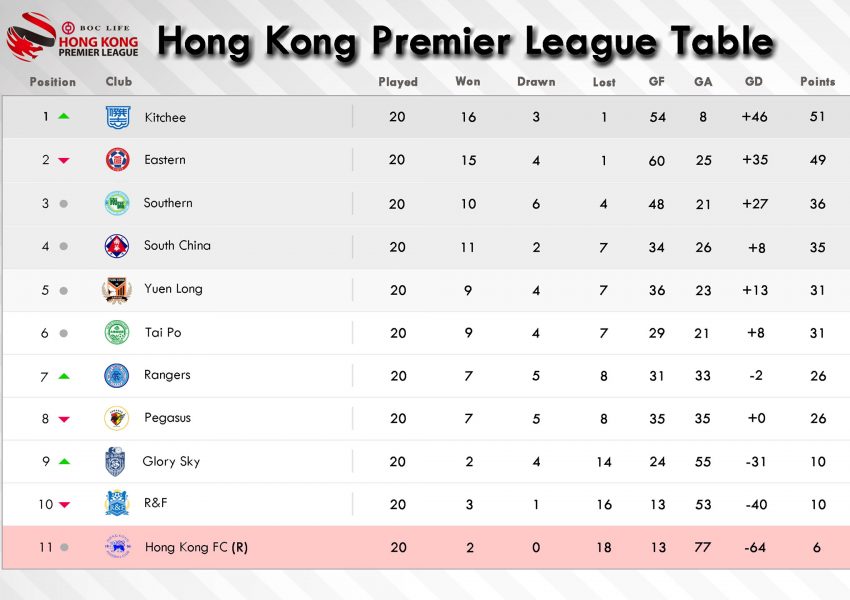 For Eastern on the other hand, the season ended in a big disappointment, as last year’s Senior Shield and league winners failed to win any silverware this year round. But their season is not over yet. At the end of May, Eastern will now compete with Southern, Yuen Long, and South China for the remaining spot in the 2018 ACL qualifiers.